It is usually more difficult to re-establish a lordosis in patients that present with a kyphotic cervical curvature and advanced degenerative joint disease (DJD). These patients usually complain of chronic cervical pain, muscle rigidity and restricted motion. Long term relief for these patients is generally not possible without some form of effective structural and soft tissue rehabilitation.

In this article I would like to present a case study of this type of difficult patient and an inventive solution I have found to help facilitate structural correction and soft tissue rehabilitation of these cases.

A 53 year old woman came to my office for evaluation and treatment of constant slight neck and upper back pain. On a 0-10 numeric pain scale, she rated her average pain as a two and her worst pain as a four. She also had constant tightness of her upper thoracic region. Her Neck Pain and Disability Index (Vernon-Mior) questionnaire revealed an eight percent restriction of her activities of daily living (ADL). The pain interfered with her reading and caused a mild disturbance of her sleep (1-2 hours sleepless). The use of a heating pad and 25 years of previous Chiropractic care provided her with only temporary relief.

On examination, her range of cervical motion demonstrated an eight percent impairment of normal motion, primarily restricting her lateral flexion and rotation. Her postural evaluation revealed a mild flattening of her upper thoracic kyphosis, mild forward head posture and a right lateral translation of her head on thorax with an associated left high shoulder. The AP and lateral radiographs were analyzed with Posture Ray™ digitalization and denoted a 20.2 mm anterior head translation with a 15 degree mid to lower cervical kyphosis (See Figure 1). The AP view showed 18 mm of right head translation. 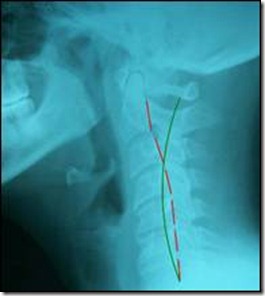 After one month of treatment (16 visits), and again after two months of treatment (16 more visits) the patient was re-evaluated. The patient stated that she was now pain free with no restrictions of her ADL, but her ranges of motion and post lateral and AP cervical x-rays were basically un-changed. Due to the lack of objective change, the seated and supine 2- way axial extension traction was stopped and supine, motorized 2-way compression extension traction was added to her treatment program for 12 additional visits. Even though this is not the ideal traction for her lateral neck/upper thoracic structure/ posture, I was desperate to get some objective change for this patient.

Re-evaluation again demonstrated no objective improvement, so the patient was released to monthly maintenance care. Some return of subjective pain was observed once the frequency of treatment was reduced. After five months of maintenance care, the patient also started getting symptoms of radicular left hand paraesthia with increased physical stress.

For the past two years I have been working on developing an inexpensive, motion-based home 2-way cervical traction device. At this point in time, I had been testing a new device design on myself. I was experiencing daily upper cervical pain and headaches after having whiplashed my neck while side-posture adjusting a very large patient. Spinal adjustments and various forms of physical therapy only provided temporary symptomatic relief. I developed eight different active exercises that I could perform with the device. After daily 5-10 minute application of these exercises for two weeks, not only had all my chronic neck and head pain subsided, but my lateral cervical curvature was also improved. So I asked my patient if she would like to try the device herself. She was instructed to stop use of the device if her pain or radicular left hand symptoms increased.

I termed the new lordotic exercise device: “the Pro-Lordoic Neck Exerciser™ (Figure 2)”. This device was modified after the CBP posterior neck traction strap exercise taught by Dr. Deed Harrison in CBP Cervical Rehab Seminars for the past several years (Dr. Deed taught this exercise to increase the upper thoracic kyphosis and load the lower cervical spine forward in Type 2-3 neck curves in the Cervical Rehab Text Chapter 6).1 I modified this, CBP neck traction strap by adding resistance tubing and padded grip handles on each side. The patient used the device, which for one month and returned for another re-evaluation. The patient’s first comment to me was “I don’t really care if my neck curve is getting any better or not. I feel and can move my head and neck so much better since starting to use this device that I do not want to stop.” 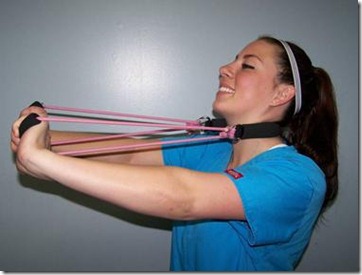 Figure 2. Pro-Lordoic Neck Exerciser™. This device was modified after the cervical neck strap used and taught for this exercise by Dr. Deed Harrison in the CBP Cervical Rehab Seminars for the past several years.Resistance straps and padded handles were added to the posterior traction neck strap.

The patient’s range of motion impairment had decreased from eight to five percent, her persistent 15 degree kyphosis had reduced to 10 degrees and her forward head posture of 20.2 mm was now 17.3 mm. (See Figure 3). This case is a good example of why it is so important to achieve objective functional and structural improvement with your patient care if you expect the patient to receive any long-term benefit from your treatments. Even after 46 in-office exercise sessions (with head halter and tubing resistance), this patient shown only mild functional improvement, no structural improvement and no lasting relief from her chronic condition. It was only through the application of daily home Pro-Lordotic™ traction exercises that a positive outcome was achieved. I have since seen this occur in numerous other cases.

A Brief History and Clinical Observations of Body Weighting For Postural/Structural Correction
January 1, 2005